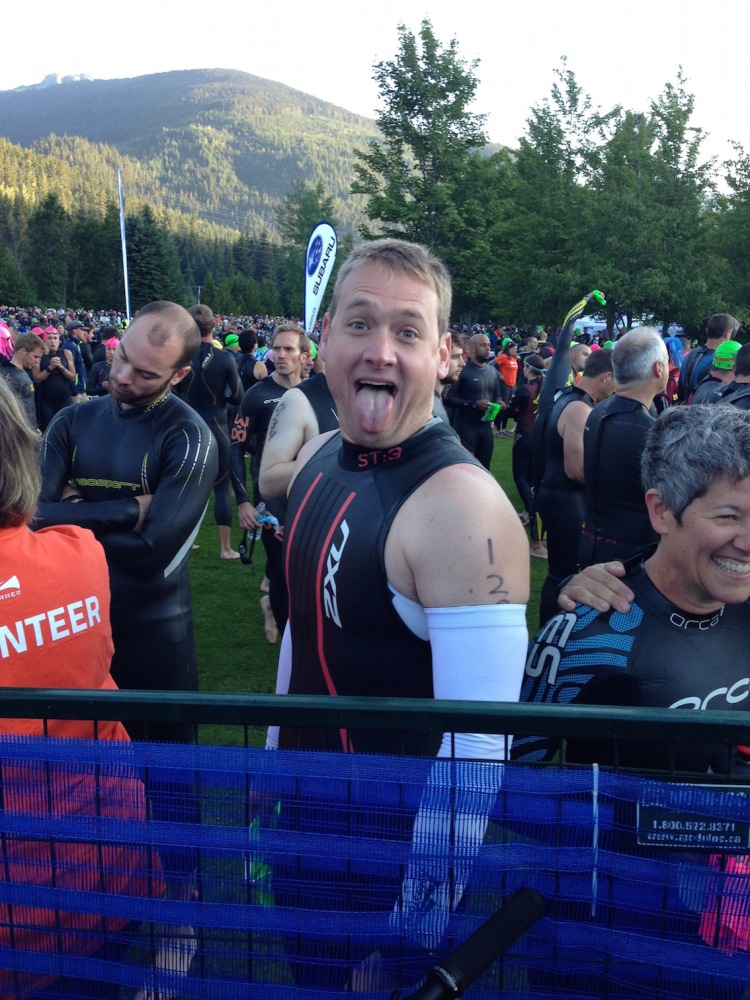 The swim, in Lake Alta, a glacial lake in Rainbow Park, is a few miles out of Whistler Village. The conditions on the morning of the race were the most perfect that I have experienced, being used to swimming in the sea. The cool, clear water with no current or swell was waiting patiently for 1900 bodies to thrash it into frenzy in the pursuit of Iron Man glory. I decided to switch to a sleeveless wetsuit for Iron Man South Africa in 2014 and despite it being 10 degrees I was comfortable in the water. As the gun went I remembered my friend Robbie “fishman” Ric’s words and looked for a suitable pair of feet to follow. It was a wet start so I couldn’t size them up on the beach and had to judge speed by the flip-flap of the wet suited legs. I started to find a rhythm and got comfortable.

It is a two-lap swim so there are a few buoys to factor in. Around the first turn my goggles took a direct hit. A stray foot removed them from my face and snapped one of the elastics. I fumbled. I panicked and I lost them. Not a great start and with approximately 3km to go, and I had to get my head back into the race as soon as possible. If it were the sea things would have been far more uncomfortable. I finished the swim in 01:16:25 (724th). That is 2:00/100 pace which is about 0:25/100 slower than I am capable of swimming.

Blurry eyed I raced through transition, with ride bags laid out on the riverbank and not hung up on a rack, as fast as I could. As if going through transition in less than 3 minutes would win back the 16min that I had left floating behind me. I was through in 02:15. I had planned for a 06:30 bike. I knew that I wasn’t at peak fitness but renting Zipp Firecrest 404 / 808 wheel set combination from RaceWheels earlier in the week got me thinking that perhaps I could go faster.

The bike route is majestic. It is a one-loop 180km ride mostly along the Sea-to-Sky highway that runs from Vancouver into the heart of British Columbia bringing skiers out to the mountains. From the lake I got into a comfortable gear and rode conservatively, knowing that there was a steep climb to Callaghan Valley. The first climb starts at the 22 km mark and lasts 15 km with an elevation gain of 350 m and a grade at its steepest of between 9 and 13%. It is followed by a long and fast decent that then levels off from the 45 km mark to the 95 km as you ride into the town of Pemberton. There is a fast and flat 40 km out and back from Pemberton and then its uphill from 140km all the way home. I looked at my average while riding back to the bottom of the final 40km climb and to my surprise it was well over 30km/h. I checked my Garmin again to make sure but I was at 04:50. Thoughts of a sub-six-hour bike started popping into my head.

I laugh, in hindsight, at the fact that I forgot how I came by that average. Downhill’s will do that. To say that I slogged up those 13% gradient inclines on the way home would be kind to me. At least I didn’t get off and push although I think at times it would have been faster. I finished the bike 06:22:54 giving me a position of 685 out of 1869 with a 28.21 km/h average.

T2 was not slick. I was a bit dazed and having decided to leave my normal nutrition in JHB and “graze off the sponsored stuff on the route” I was also trying to think about what to eat before the run. I try to steer away from Coke until I absolutely have to and the GuBrew that was at the stops was just not doing it. 5:02 transition onto the run. It was the first time that I got to see Del so I stopped just after transition to say hi and with an overall time of 07:46:36 it was possible, with a tidy run, to pull off a12 hour finish. I was feeling stronger as I went and the first few km were very pleasant.

The run is two loops of 21.1km through Whistler Village and onto a hiking trail (the Valley Trail) that takes the athletes past Lost Lake and Green Lake before looping back to the Village. There is a generous downhill from the 2km to the 8km mark followed by sharp hills for 8km up to the 18km mark with a 60m climb for the final 4km. Then repeat. The run route takes the athlete through forest and dirt footpaths with the occasional water crossing. I had hoped to run 04:40 for the distance. My legs had one or two other ideas and for the first time in my short Iron Man career I walked. It felt glorious. The scenery on this race is something to behold and I cannot recommend it in strong enough terms for all those looking for a holiday IM race.

The Canadians are a special bunch. The encouragement and support from the spectators, who did not stop partying until the very last athlete was home, was brilliant. Del, not being one to watch from the sidelines, took up a volunteer position on the run route as a marshal and chatted to the friendly athletes and organizing staff. I chatted to two ladies from Southern California who had driven up for the weekend to volunteer and assist the organizers of the race. That made my 05:39:22 seem a bit more bearable. My 8km/h average run meant that my overall time was 13:25:58 placing me 997 out of 1869 entrants. Very average performance but an above average race with scenery to slow down for. Well that is my excuse anyway. The Maple Leaf finisher medal is also pretty special.